[The ONE] is a patient instructor who is willing to let me proceed at my own pace. 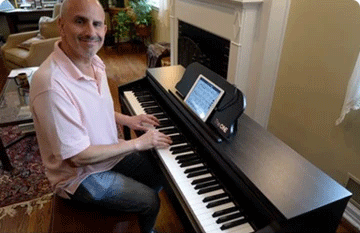 NEW YORK — I’ve always wanted to play the piano but never got around to taking lessons. Now at long last I’m learning to play, and I’ve got a patient instructor who is willing to let me proceed at my own pace.

The piano itself is doing the teaching, through a mobile app and a series of LED lights that are synchronized to interactive sheet music.

I’ve been testing the One Smart Piano from the One Music Group, a San Francisco startup that has been raising money for its digital instrument on the Indiegogo crowdfunding site.

One Smart Piano is a digital wooden upright with 88 weighted keys and three pedals (soft, sostenuto, sustain). For now, you can get it, though the company says the retail price will eventually climb to $1,500. One looks and sounds like a real piano but at 121 pounds was a mother to assemble. A toolkit is included, but I’d suggest putting two bodies on the job.

I love music and have always been able to use a single finger to bang out a melody by ear on a piano keyboard. In all other respects, though, I’m a total novice. To this eager student it was a delight to use.

I’d also recommend the piano as a good solution for folks who maybe took lessons as a kid and all these years later want to channel their inner Billy Joel.

Judging by the positive reaction I got from 8-year-old Samuel Baig, someone such as my son is another candidate.

While the One piano is essentially about learning, I’d consider it a fine choice for even an accomplished musician, especially at its relatively modest price. My friend Vito Pirrera, who plays wonderfully, was impressed by the audio quality and the fact that the keys provided the proper hammer action feedback. (That is, press harder for louder sound; press gently for softer audio.)

Of course, what makes the One piano stand out from the chorus is that you can connect an iOS or Android device, download the aforementioned app onto your phone or tablet — an iPad in my case — and watch video tutorials as you play. Sound is piped through the piano’s own speakers, or if you’d rather not disturb family members or housemates, through earphones.

What’s more, the video lessons, as well as the interactive sheet music that you can follow along with, are synchronized so that LEDs above the keys you are meant to strike at that moment light up. The light is red if you’re supposed to use your right hand, blue if you’re suppose to use your left.

This system generally worked well, though occasionally the lights seemed out of whack and on complex material was still quite challenging. I’ve only been playing for a relatively short time, so I’m not ready to judge if this paint by numbers approach to mastering the piano will be an effective teaching method long term.

While going through training exercises, you can isolate either hand, or use both of your hands. And of course, you can pause or replay instructional videos so that you can practice. If you’re happy with what you’ve played you can record and share it.

When it comes to the interactive sheet music that is synchronized with the lights, material in the public domain — that is pre-1935 — is free. Sheet music for more recent tunes are available between 99 cents and a pop, the company says. You can search for music to practice with by genre.

It was fun watching the dance of lights as the piano demonstrated how Für Elise is supposed to sound. Fortunately, when it was my turn to tackle Beethoven I could slow things down considerably.

Eight-year old Samuel thought the lights were really cool, too, and he enjoyed a couple of video lessons from an online instructor named Joseph Hoffman. Sam was especially thrilled he could play his first simple tune, Hot Cross Buns, in no time.

Hoffman obviously had kids such as Samuel in mind with some of his lessons. For example, Hoffman explained the location of “D” notes on the piano keyboard by suggesting that dogs live in doghouse on white keys between two black keys.

Samuel was mostly engaged by the games — you follow lights and hit falling notes on the screen to score points as you play along to the Polovtsian Dances, Moonlight Sonata and Little Star. You can choose games by level of difficulty.

As with other digital pianos, you can change the digital instruments on the One piano. Switches to the left of the keyboard let you adjust the master volume, tempo or turn on a metronome. And you can use the One piano as a MIDI (Musical Instrument Digital Interface) keyboard when you connect it to a computer.

Meanwhile, if you don’t have the room in your house or budget to accommodate a full-size piano, the company sells a portable keyboard with 61 LED keys and MP3 speakers.

I’m not ready to go on tour as a featured solo artist. But One Smart Piano is one fun way to try and get there.

One Smart Piano from One Music Group.