Steve Wonder at The ONE CES Booth 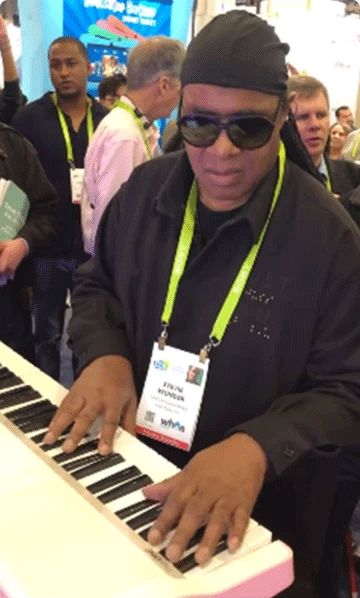 In this Wednesday, Jan. 10, 2018, photo, musician Stevie Wonder plays a so-called “smart” piano, an internet-connected device designed to teach people how to play, while piano teacher Gabie Perry stands next to him at The One Music Group‚ CES booth in Las Vegas. , AP Photo/Matt O’Brien

LAS VEGAS — Trying to distinguish your product among the thousands at the CES gadget show is no easy feat, so it helps when music legend Stevie Wonder pays an unexpected visit.

Especially when your product is a “smart” piano designed to teach people how to play.

Piano teacher Gabie Perry was demonstrating the internet-connected device, made by a California startup, when someone told her that Wonder asked to try it. She thought it was a joke.

Wonder spent about 15 minutes playing tunes as a crowd gathered at The One Music Group’s CES booth in Las Vegas. Wonder says he likes to visit the conference to “see new things” and meet people. He’s among several celebrity musicians attending, including rapper Iggy Azalea and Aerosmith guitarist Joe Perry.